You are here: Home / Patient Safety and Satisfaction / How important is presentation to a hospital menu? 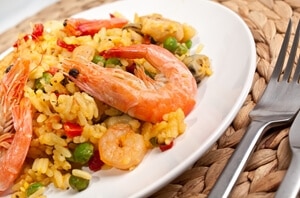 You might think that taste and texture are the main drivers behind patient satisfaction when it comes to hospital food service, but there’s actually something else at play that makes a big difference in whether a patient likes or dislikes a meal: presentation. How food looks greatly influences whether or not we want to eat it, which is why we say that people often “eat with their eyes.” That’s why you’ll fill up a buffet plate with everything that looks good, only to find that your stomach can’t actually fit it all. If food looks tasty, we’re much more likely to eat it.

In the past, hospital menu items didn’t have the best reputations when it came to how appetizing they were. People weren’t thrilled about eating bland, colorless meals served on boring plateware. But ever since patient satisfaction scores have become more important – the results of the new patient satisfaction survey linked to the Affordable Care Act are tied to 1 percent of a hospital’s Medicare reimbursement – food service management personnel have put more of an emphasis on presentation. So how can you boost your operation’s presentation skills?

Pay attention to the tray itself
According to FoodService Director magazine, Jackson County Memorial Hospital in Altus, Okla., updated its plateware from mismatched utensils to a matching set, with color coordinated plate covers, plate bottoms, mugs, bowls, trays and tray liners, as part of its effort to improve meal scores – and it worked. The hospital also tweaked the placement of the utensils on the tray, putting silverware and mugs on the right side for easy access, since most people are right-handed. The condiments are also now placed in a small container so they’re not scattered everywhere.

Leave one-third of the plate empty
According to Nutrition411, leaving one-third of the plate empty boosts the appeal of the individual dishes by showcasing each one on the plate. Food that’s crammed together or overflowing from the plate can be overwhelming for children or patients who have appetite issues, like those with eating disorders. Leave room in between each portion of the meal so everything stays separate.

Use as much color as possible
The Association of Nutrition and Foodservice Professionals pointed out that color is one of the most important things to keep in mind with food presentation. In the feature article “Giving Hospital Food A Second Chance,” Teresa Braden, C.D.M., C.F.P.P., gave an example of the difference that color can make by putting two dishes side by side. The plates were both made up of a slice of turkey breast, white gravy, mashed potatoes and peas. One plate just had these ingredients, while the other plate added orange carrots to the peas, green chives to the mashed potatoes and a slice of orange as a garnish, and it looked a lot more appetizing.

Make pureed foods more appealing
Some patients are restricted to a pureed diet, and these meals are often the least appetizing. However, Wardipedia suggested making pureed foods more appealing and recognizable by using molds to shape them into the foods that they are. For example, pureed chicken can be shaped into a chicken breast instead of a pile of mush, while pureed peas can be molded to look like a pile of individual peas instead of a green blob.

Choose different textures
A variety of textures not only makes a plate look more appetizing, but it makes eating the meal more enjoyable. Aim for a combination of crunchy, crisp, cool, hot, soft, chewy and firm foods in dishes whenever possible. Nutrition411 gave the example of roasted potatoes, sauteed spinach and grilled chicken being more appetizing than mashed potatoes, creamed spinach and chicken potpie.