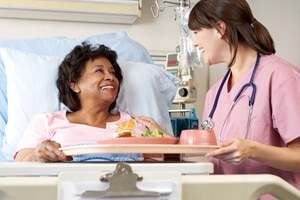 While many people have become unsure of how the Affordable Care Act will affect their everyday lives, those in the hospital food service industry have been some of the most concerned. Now that Americans are being required to sign up for health insurance, hospitals are preparing to see new patients – many of who will expect the utmost care.

The Journal Times reported on Wheaton Franciscan-All Saints Hospital over the summer, which began offering room service and valet parking to its patients in lieu of the act. While these all seem like amenities that would be better suited at a hotel, the hospital is attempting to earn a 1 percent bonus for its efforts. By 2017, establishments will be able to obtain a 2 percent bonus from the government. For this reason, hospitals are paying more attention to patient satisfaction in an effort to enhance their reputations – and avoid penalties.

Room Service Dining at the Wheaton Franciscan-All Saints Hospital has substantially expanded, along with its menu which was designed to suit the taste buds of patients. Individuals can also now order any non-prohibited food between 6:30 a.m. and 6:30 p.m. to accommodate their appetites.

“If you had a rough night, you can sleep in and not have somebody banging on your door at breakfast time,” Marianne Koch, All Saints director for food and valet services, told the news source. “It’s great for [new] moms. If they’re ready for a roast beef sandwich at 2 p.m., they can have one then.”

Uncertainty in the hospital food service industry
As Food Service Director magazine reported, many people in the industry still have no idea how the Affordable Care Act will affect their business in the future. A 2013 hospital census that gathered information from 123 hospitals across the country found that 37 percent of workers don’t know enough about the act to make a judgment. About 17 percent of the people surveyed claimed that they expect a big impact on their food services as a result of the legislation.

Since the act went into effect, about 57 percent of respondents said that they had made upgrades and changes to their menus to enhance patient satisfaction. Nearly 50 percent shifted their focus to more customer service training. While there’s no rule that says a hospital or food service provider needs to make adjustments, doing so can help them stay competitive.