You are here: Home / Diet and Nutrition / What should you know about foodborne illness? 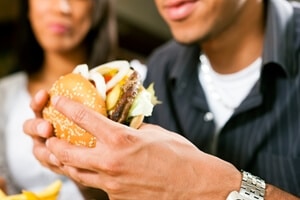 You’ve probably heard news stories before about large groups of people getting sick from contaminated foods they ate at a fast food restaurant or even purchased at their local supermarket. While these stories can certainly be shocking, you may have thought that it was unlikely that this could happen to you or the people you service. However, millions of Americans become ill each year after consuming foodborne contaminants, and some end up in the hospital or even pass away as a result. In fact, annually, nearly 20 percent of Americans get sick due to something they ate.

Just as you can easily come in contact with foodborne contaminants, they can also be avoided by taking some simple safety precautions.

Measuring the impact
Each year, an estimated 48 million illnesses are caused by foodborne contaminants. These illnesses result in 128,000 hospitalizations annually, which end up costing the U.S. nearly $78 billion in medical costs and loss of productivity, as well as deaths. Unlike with many other sicknesses, anyone can be impacted by the effects of foodborne contaminants. However, some populations are more likely to get very sick than others such as pregnant women, older individuals and people with chronic illnesses.

Individuals experiencing abdominal pain, fever, chills, vomiting or diarrhea may be affected by a contaminant. However, those affected by headaches, numbness of the skin, blurred vision, weakness, dizziness or paralysis may have come in contact with more dangerous infectious agents, such as C. botulinum, which may affect the nervous system.

Where does it come from?
Eight out of 10 food-related illness outbreaks are the result of food prepared in commercial settings. Also, 53 percent of Norovirus outbreaks caused by sick food handlers contaminating food. Usually, plants or land animals contain the harmful bacteria and viruses that cause these illnesses.

Some of the most common contaminants are found in undercooked meat, poultry, dairy products eggs and seafood. The contaminants include Salmonella, Campylobacter jejuni and E.Coli, which can also be found in unpasteurized fruit juices and milk and fresh produce. Furthermore, viruses such as the Norovirus and Hepatitis A can be spread by sick food handlers, and harmful parasites and chemicals can also make their way onto foods.

There have been many outbreaks of foodborne illnesses over the years. For example, in 1985 there was an outbreak of California listerosis found in queso fresco. This resulted in 86 infections and 47 deaths. In more recent history, a 2011 outbreak of listerosis in U.S. cantaloupes  caused 146 infections and 30 deaths. For a truly shocking statistic, consider the 1985 U.S. salmonellosis outbreak in milk which lead to 5,295 infections and nine deaths.

Protect yourself
So how can you avoid the people you service falling victim to a foodborne illness? First, you should be sure to wash your hands regularly especially before preparing food and after using the bathroom. You also need to make sure that the surface you are cooking on is clean. Furthermore, always separate raw meat, poultry and seafood from other foods and use different utensils for preparing these foods than others.

Also, you need to always cook food thoroughly, particularly meat, poultry, eggs and seafood. Make sure all soups reach a temperature of 158 Fahrenheit and use a thermometer while cooking whenever possible.

To be safe, do not consume cooked food that has been at room temperature for more than two hours, and do not store food for too long in the refrigerator or thaw food at room temperature. Always wash foods with clean water and choose fresh foods whenever possible.

Finally, never eat food that is past its expiration date to avoid encountering foodborne contaminants.