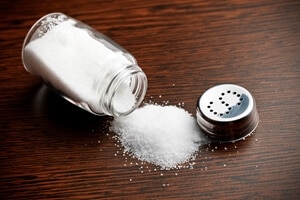 Considering that salt is one of the simplest ways to enhance the flavor of a meal, it should come as little surprise that almost every popular food imaginable features moderate to high levels of sodium. Beyond the obvious salt-heavy snacks like potato chips and French fries, even dishes that are seemingly sodium-free are found to have high levels of this substance. In today’s day and age, it’s getting harder and harder to enjoy a meal that isn’t covered in salt.

However, with all of the scientific evidence pointing to the drawbacks and health risks of consuming an excessive amount of sodium, hospital food service managers should be taking necessary steps to reduce or even eliminate added salt from their meal plans. After all, healthcare organizations should be the last place that people should be eating unhealthy foods.

Finding ways to cut out the salt
Foodservice Director magazine reports that many healthcare and educational organizations have been working to find alternatives to salt-rich foods. As many packaged, processed options like meats and cheeses are riddled with sodium, selecting fresh ingredients instead can help cafeterias and kitchens provide healthier meal choices.

For example, Executive Chef Brian Axworthy of Colorado Springs School District 11 told the news source that he regularly uses fresh herbs and spices instead of prepackaged ingredients to provide optimal flavor without the salt. Similarly, Axworthy also employs cooking techniques – such as slow roasting and braising – that add flavor and texture to meals without excess sodium.

Widespread initiatives against sodium
According to Food Management magazine, the U.S. Food and Drug Administration has been taking steps to reduce the salt content in many processed foods across the nation. The logic behind this is that Americans will crave less salt if they are not regularly consuming it in mass quantities.

This initiative, originally launched back in 2010, hopes to wean Americans off of dietary choices with high sodium levels that have become commonplace in the U.S. This effort is ongoing, and the FDA hopes that reducing salt consumption can improve rates of heart disease and hypertension associated with the substance.

Many school districts are also getting in on the anti-sodium action. Another article from Food Management noted that the Institute of Medicine called for meal plans with significantly lower salt content in 2009. This is in addition to calorie restrictions, starch reduction and increased focus on fresh fruits and vegetables. It seems this message is starting to sink in, as the School Nutrition Association accepted the IOM’s recommendations. Healthcare food service managers may want to consider similar nutritional initiatives to improve the quality and health benefits of their meals for improved patient satisfaction.