You are here: Home / Diet and Nutrition / Hold a food competition among local hospitals 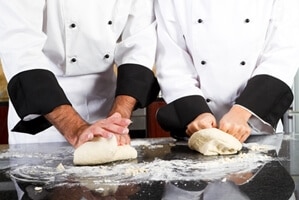 Healthcare institutions have been reevaluating their hospital food service as one of the sectors where they can heighten patient satisfaction as a result of the Patient Protection and Affordable Care Act. Though plans for improvement may be daunting for some facilities and their kitchen staff, they can also be fun.

Consider a friendly competition
Earlier this year, the Massachusetts Health Council’s annual gala featured a culinary contest between local hospital chefs, the Boston Magazine reported. The competition required the chefs to assemble tasty, but healthy appetizers – trans fats were banned, saturated fats could not exceed 10 percent of the dish’s total calories and each station had to provide a dietary label.

The South Shore Hospital won first place in the competition. According to The Patriot Ledger, the kitchen staff beat out other competitors with their small portions of vegetable pad thai, bite-size lime and ginger marinated Kobe beef and firecracker vegetable rolls served in bento boxes.

Hosting a friendly competition between local hospital kitchen staff can be a fun way to promote healthy meals and thereby patient satisfaction. Consider approaching a local health group that your institution is a member of and propose the idea. Chefs and their staff can show off their culinary skills to other hospitals and even exchange recipes. This could help inspire other kitchens to create dishes they would not have thought of, or even explore another culture’s cuisine.

Winner of the MHC’s contest, chef Michael Quinn pointed out that hospital food quality was improving.

“At all the hospitals, the level of the culinary people is getting higher and higher. We’re attracting lot of the people who used to go to restaurants,” Quinn stated.

Think about the potential results
Kitchen staff would likely be excited about the prospect of participating in a local competition. Bragging rights would be won, public attention would be raised and most importantly, the essential work of hospital food service would be openly recognized.

To encourage hospital kitchens to continue creating healthy and delicious meals, local health organizations may want to consider holding annual competitions that will have culinary staff experimenting on a daily basis. Featuring a friendly culinary competition would benefit not only the reputation of hospitals and the confidence of kitchen staff, it would ultimately improve patient meals and thereby, satisfaction levels.